In January this year I wrote ‘Should Scotland have a Mediation Act? The Irish Experience.’  This was published in Scottish Legal News and in the online edition of the Law Society of Scotland Journal.
In February I made my own submission to the Justice committee’s consideration of ADR with regard to mediation.
In April I met with Margaret Mitchell MSP convener of the Justice committee at her invitation when I argued for Scotland to adopt a Mediation Act.
In June this year I wrote an ‘Open Letter to Nicola Sturgeon’, First Minister of Scotland published in the July edition of iScot, commending her conduct using mediative techniques in negotiation with the UK government on the separation of powers between the Parliament in Holyrood and the Parliament in Westminster. 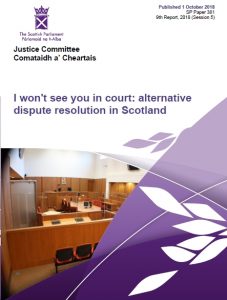 I argued that the Government in Scotland should introduce a Mediation Act to enable mediation to become the Normal Dispute Resolution process in Scotland.
On 1 October 2018, the Justice committee reported on its deliberations with regard to ADR and noted my suggestion, supported by others, that Scotland should consider whether to introduce a Mediation Act in order to assist mediation in becoming a normal part of our dispute resolution process. Click here to see PDF version.
The next step is for all organisations with an interest in mediation to lobby the Scottish government and to encourage its, and its civil servants (with whom I have been in correspondence) embracing of mediation as a normal means of dispute resolution… And to consider the early introduction of a new Mediation Act of the Scottish Parliament, along the lines of the Republic of Ireland’s.
This process has reminded me of the view of Narrative Mediators. Even in an asymmetrical power relationship-no one is truly without power. There is no such thing as a lost cause. We all have power; we just need to use it!
If you want to know more about mediation or if you need my help in mediating a legal dispute then you can find my details here.

Posted by Paul Kirkwood, a Commercial Mediator who has also practised as a litigation solicitor for 24 years. He is a director of MNCRS Mediation, Negotiation and Conflict Resolution Services. 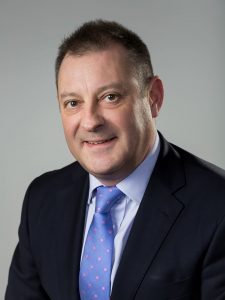